Most popular breed of cattle in the US.

Angus Black Angus cattle, also called Aberdeen Angus, are the most popular breed in the U.S., and thanks to some excellent marketing, their meat is in demand, which means these cattle -- and crossbreds with mostly black markings -- often bring a premium at the sale barn. 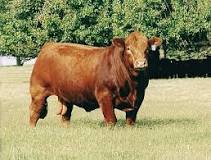 The French Limousin breed is claimed by far the most popular beef breed in the UK and has been for 20 plus years , the Aberdeen Angus accounts for around 15% however the majority of cattle most people see is in the fields is the Freshian ( black and white) which is a dual purpose for dairy (and meat) producer

I bottle fed and raised an angus bull calf. I would never have eaten him and when he weighed 2200 pounds I traded him for a car with the understanding he was never to be used for meat. He was a gentle giant, I could lead him around with a dog leash, course he was neutered, we had to many dairy cows to have an intact bull around. he was less than two weeks old when he came to me, I bottle fed him and taught him to drink out of a pail An animal that is bottle fed grows up to be much friendlier than one left with its mother. So most of our ccalves were ottle fed. They stayed with mom for fie days because they needed the colstrum in moms milk, then they wejt to the nursery with other calves and were taken care of by people

My grandfather had a Hereford bull (which are brown and white), to service his herd of Fresian diary cows ( and other diary farmers cows). 'Bully' had a curly white face, I was about 5 yrs old and can remember climbing on the gate which was not allowed so I could rub my hands through his curls, he was a gentle giant but when he was in the field I wasn't allowed in.
It was the only time I remember my grandfather crying when foot and mouth hit and all his cattle including 'bully' (and all other cattle in the area) had to be culled and burnt by the Ministry of Agriculture on the farm.

a bull can never be trusted, one minute they are gentle and can turn on you in a heartbeat. Once neutered they settle down and are ok but an uncut bull is a very dangerous animal. My father in law had charlotes which looks like a white herford. that bull killed my father inlaw a bull he thought was gentle turned out he wasn't.

linda2147 said:
a bull can never be trusted, one minute they are gentle and can turn on you in a heartbeat.
Click to expand...

You are so right!