I choose her in the pet shop because she was sitting in her food bowl and drinking out of the water bottle by sticking her head around at a funny angle.

She looked lively and funny – not to mention cute! As soon as I saw her I knew she was the one for me.
I bought loads of things for her at the pet shop, though I had already set up a cage for her before, so that as soon as we got her home she could settle in.
She was spoilt right from the moment I bought her!

When I took her home that night she scurried around her cage for a while: exploring her new home. When she finally went to sleep, instead of going in her bed I had bought for her with bedding in it, she just curled up in the corner without anything! It was the sweetest thing, and she looked so small and cute! After that I put the bedding somewhere else so that she could see it easily and move it wherever she wanted. She never did like her proper bed very much!

I played with her every day for the next few months, and after that I played with her at least every other day; we were never parted for long.
I remember going holiday for 2 weeks, and I had to leave her behind. I was so sad, even though I knew the holiday would be great and I would be with Lolly again soon.
She was always such a lively hamster; she would never stay still in your hands, and was constantly crawling up my jumpers! Taking photos was always a challenge as she was always moving about!

She remained lively and quirky right up until the week before she passed away. Unfortunately in that week she became slow and looked like she struggled to move sometimes. Her death was quite quick and sudden though – and I know I should be glad because she wasn’t going through loads of pain before she died, as it was so quick.
I was upset because I only really had 3 days with her after before she died, as I was away the week before.
My parents say she was waiting for me before leaving.
I was with her the moment she died, so she was not alone.

Rest In Peace Lolly, you will never be forgotten. 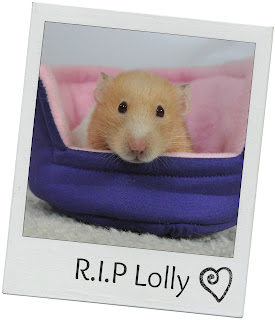 What a heartwarming story about your little Lolly, Hannah. I'm very sad for your loss. It sounds like both of you had a close bond, you should always feel good about that. It's also nice of your parents to make sure she was well cared for while you were away. You gave her a loving home and made her life so special, she's gone but will never leave your heart, that means so much for the both of you. :sentimental:

Thank you Alpha1, it means a lot, and makes me feel that bit better :sentimental:

Aw, Lolly looks really cute in that photo. It sounds like you had some good times together, and you played with her a lot, which I'm sure she appreciated. I'm glad that she wasn't in pain, and you at least got to spend a few more days with her.

Thank you kittydancer, I hope she appreciated me playing with her too. And I am glad I did get to spend the last few days with her. :sentimental:

I'm so sorry about your Lolly. That is so sad. Your tribute and story about Lolly was so sweet. She was so lucky to have you. What a little precious! You gave her everything she could have ever wanted...including the most important LOVE. Rest in peace little Lolly.

Thank you for your support eslucky and Animalgirl. It means a lot :sentimental:

Lolly was a sweet little soul and I'm sure you have some beautful memories of her, RIP little Lolly. Hugs to you Hannah.
R

Hamsters can make great pets. When I was a kid I had a pet hamster called... Mel (lol) Took her everywhere in the house, loved her to bits. Remember thinking she was dead once and was crying my eyes out, shocked to find out she was in a deep sleep lol... then... she did die and I cried again lol.

So sorry about Lolly though, I feel your pain.
D

Im so sorry about lolly, she was a lovely little girl. My hamster passed away two days ago too. My condolences.

I got a puppy!

I'm so sorry about your loss.